Get Certified With APS

Give yourself an edge in the purchasing profession by getting certified as a CPP, CPPM, CGPP, or CPPC

Vertical integration 2.0: This time, it's strategic

For years, academia and the real world have long preached about the value of outsourcing, part science and art, for its ability to give purchasing organizations a competitive edge by allowing them to focus internally on core strengths, i.e., what they do best. It’s also well-documented that those organizations that best command and have unfettered visibility of their supply chain are among the most nimble and successful.

No single event fueled outsourcing more than free trade policies and the Internet – both of which led to the crumbling of geographic walls in the global economy. Those that resisted or were slow to react to globalization and embrace exponentially larger, more diverse supply chains did so at their own peril. But as a recent article in The Economist points out, many companies, especially Silicon Valley types, have long or are now revisiting hybrids of vertical integration and doing so successfully.

The article asserts there are five major reasons for this vertical integration revival: Customers want the elegance of simplicity, and compatibility, particularly with electronics parts; efficiency (Boeing’s 787 Dreamliner “disaster” of poorly fitting and late-arriving parts, for example, forced it to bring manufacturing back in house); muscling greater market share by offering customers choices (Amazon and Netflix created their own video streaming services and now feed them with their own original content); speed (one fashion company, for example, hired its own designers, shops and factories and created its own delivery system); and finally, risk avoidance from increasing geopolitical instability and environmental uncertainty.

There are numerous recent examples of successful efforts with vertical integration.

Take module-level power electronics (MLPEs), a complex global solar energy market that includes things like photovoltaics and so-called “power optimizers.” The increasingly vertically integrated market has a 20% CAGR that promises to continue over the next 3-4 years, according to IHS, a leading global economic analysis firm. Major module suppliers are either partnering with MLPE suppliers or beginning to switch to “make” in their make-buy decisions. As IHS points out in a recent report, “Module suppliers recognize that adding a microinverter to create an AC module, or adding power optimizers to create a smart module in the factory, allows them to differentiate themselves from the competition and give their customers more options.” There’s that “choice” word again.

Another example is Tesla, a market leading electric car company whose sister firm, SpaceX is in a race to produce privately manufactured rockets. Tesla is a fiercely entrepreneurial company whose “outside the box” culture screams vertical integration. All of the company’s vehicles are produced in one California plant; it is building a nationwide network of its own branded charging stations; and in the Nevada desert, has built a massive  factory that will begin producing the lithium battery power plants for many of its vehicles by 2017. Even the plant was designed to produce its own renewable energy and operate on a completely self-sustaining basis.

They ring true, especially for historic and venerable companies like IBM.

A company that built its fortunes on behemoth mainframes, big blue’s entre into the personal computing business in the 1980s seemed logical. Much of the early software that ran its PCs also came from IBM. Some techno history buffs blame the near disaster on a company that miscalculated the explosion of PC and software competitors, a lack of strategic sourcing expertise and a bureaucracy that allowed the firm to bleed red from the loss of market share for too long. Since shedding its PC and laptop business in the early 2000s, the company has returned to its core business and touts a world class purchasing organization. Even its management describes the company today as horizontally integrated.

For decades, Xerox’s bread and butter was photocopy machines and like so many companies, had a vertically integrated structure. The digital revolution changed Xerox and today it is as much known as a data and technology company as a provider of many kinds of outsourced business services serving innumerable, unrelated markets across the globe.

Are there are any companies today that are 100% purely vertically integrated and completely self-reliant? Unlikely, if not impossible. Even companies like Apple rely on companies in Asia to make their Apple-conceived, designed and marketed products. But the age-old business model is starting to get a second look. The difference this time is companies are using vertically integrated structures because it gives them a strategic advantage. 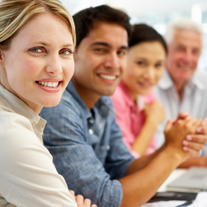